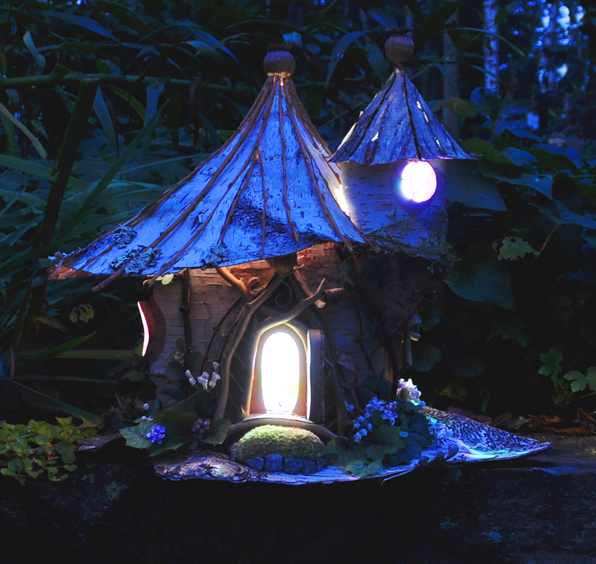 An homage to the Environmental Art of Sally J Smith of Greenspirit Arts and her magical visions of Faerie Houses.

Daffodils and tulips pushed their way through the sleepy soil, announcing their arrival in a spectacular display of living color.

Sally ran her small fingers across their velvety petals, selecting the brightest ones for her special project. She added the jewel-toned flowers to her pile of birch bark, white willow twigs, wild grape tendrils, rivers stones and dried moss.

Each Spring, as the world around her blossomed, a menagerie of critters, feathered, furred and frog-like, would set up residence in her backyard.

Some guests were more magical than others.

Four years ago, today, marked Their first appearance in her mother’s garden. Every year since, she has sculpted a safe haven for the weary-winged travelers, each more enchanting than the one before.

Sally passionately constructed her vision from the collection of nature’s trinkets she gathered earlier that morning. She swept away a small clearing around a cedar stump and nestled a large base of bark upon it.

Hours fell away as she carefully placed each whimsical element. Under her skilled hands, a miniature house took shape, complete with a circular tower, latticed windows and moss covered door.

They will be pleased.

Sally reluctantly crawled into bed later that evening, her gaze drawn to the delightful creation silently waiting on the other side of the glass.

She struggled to stay awake, but the excitement of the day weighed heavily upon her lids. Lulled to sleep by a cacophony of chirping and croaking, Sally slipped in and out of fairytale dreams as night took hold.

A tapping on her window jolted her awake.

Rubbing slumber from her eyes, Sally strained to penetrate the inky darkness.

A ripple of movement darted past the window.

Throwing her covers aside, she jumped out of bed and pressed her forehead against the cool pane.

What she saw made her heart flutter.

A welcoming glow flickered from within her crafted cottage, casting shadows of tiny wings and faerie things. 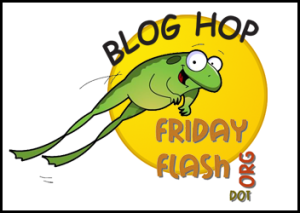 Four years ago to the day, on May 29, 2009, FridayFlash was born. Happy Anniversary to this talented writing community! May you continue to build wonders with your imagination:)

I appreciate feedback, so comment, critique or just banter to your heart’s content! Should you leave a really awesome comment, I may share my fair-trade, shade-grown, bird-sanctuary, organic coffee with you:) Or, if you leave a link to your site, I can just pop in and say something witty after polishing off a cup or two!